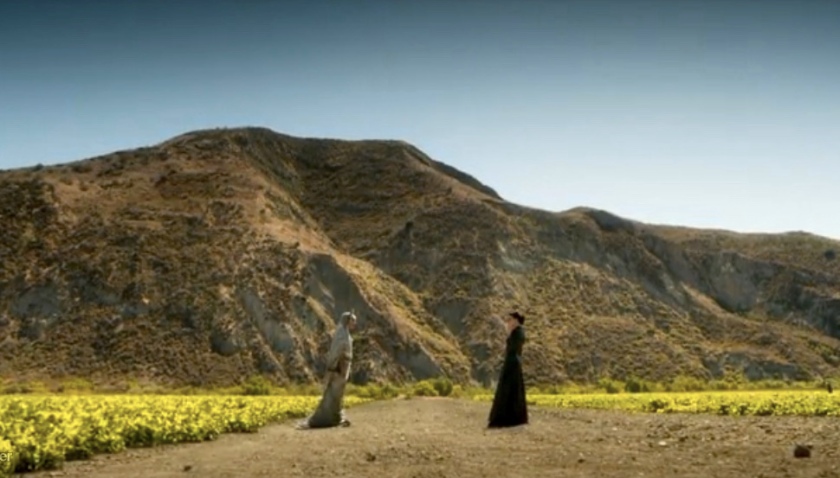 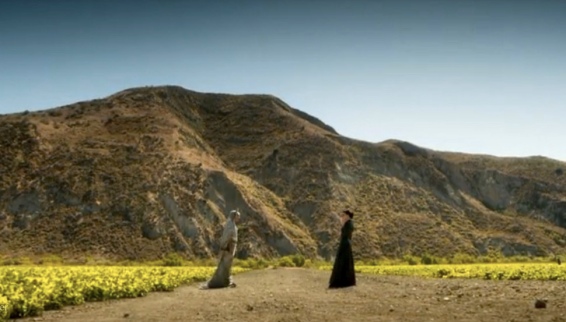 I can’t say enough about it.

Let me start, though, by saying that I didn’t watch the first season, but I’m all in on this one. When I work full time I find it difficult to concentrate on media that requires a lot of engagement. Bubblegum for the brain, please. In addition, I’ve had my own issues, as we all do, that make it hard to focus, just recently. If I’m working, then home time is for household chores and writing my own novels.

The casting, the actors, the cinematography…Okay so I don’t know much about cinematography, but I know that when I want to pause a show just to linger on a shot, it’s got to be good, right?

Magda is facing off against her sister, Santa Muerte, and I can’t help but hope that Santa Muerte starts to lend a hand.

Meanwhile, the police hate the Mexican community, the unions are fighting for worker’s rights, the Nazis are manipulating Los Angeles politics, there are evangelical churches, corrupt politicians, tensions in the police force…There are a lot of balls in the air, and somehow even subplots sail along on the wings of a brilliant cast. Even minor characters have actors intent on doing them justice. Brent Spiner is in this!

I tweeted earlier that Nathan Lane made me cry just walking up a staircase. Whenever he’s on screen I have to watch. There’s not a moment where he isn’t worth of it.

Not that he’s the only one; Daniel Zovatto as Tiego can express so much with his face. Once again, I’m struck by how much the acting compels you to watch, for how much you would miss if you don’t.

The parallels between Lane’s Lewis Michener and Zovatto’s Tiego Vega, their pain when out of view, in the liminal space of the staircase, prepared to move up or down as their hearts would will it, instill such a sense of helplessness. We want them to listen to their better angels, but with Magda lurking, it seems so much harder to climb.

If there are flies in the ointment so far, for me there are only two. The first is Natalie Dormer. Or rather, her fourth role as Rio. Playing so multiple characters is no easy thing, as Orphan Black proves. I think she does well at three, but while I bought the look of her gang leader, and fell a little in lust,

I felt she was too stiff, especially when compared to Sebastian Chacon’s Fly Rico.

The second was the handling, thus far, of lesbian and gay coding. The Crimson Cat dance scenes were a feast for the eyes, and definitely liberated, we know that Magda is in charge, in the form of Rio, and we know that what Magda does is bring out the worst of people’s natures. Are we then to assume that the Crimson Cat and what it stands for is the worst of human nature?

Or are we to contrast its joyful disorder with Councilman Townsend? Townsend, who is willfully collaborating with Nazi Germany (though again, under Magda’s influence), is revealed at the end of episode three to be in the closet. This particular trope is probably the first time that I felt the show was tired. We had hints of the dark secret he was hiding (somehow darker than collaborating to hand LA over to Hitler) and I was really hoping this wasn’t the direction they were going.

Is Magda preying on the denizens of the Crimson Cat only because they are the ones with the most to be angry for and the least to lose? They’re not, at least, the villains in any more of a sense than Lewis and his small party of Jewish friends, or the unionizing resistors of Raul Vega’s group.

What we’re left with is the eternal understanding that if these groups could get their shit together, they’d be a force to reckon with.


What I’m Listening To: rain